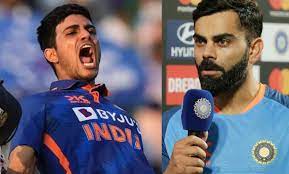 Shubman Gill has recently played one of the greatest ODI innings of all time on Thursday as he scored a double century on a pitch as most of his teammates struggled to make a high-mark. His 208 off 149 balls took India to a score of 349/8 and while it looked as though the hosts might pull off a big win after they sent half of its New zealand side back in the hut within its First 25 overs. Further, they only ended up winning the match within the last over thanking Michael Bracewell for an astonishing knock of 140 off 78 balls.